In 1881, fire ravaged the Texas state capitol building in Austin. To finance its replacement, legislators bartered away three million acres of prime grazing land to big-city investors, who in return built an impressive new state capitol. The investors surveyed and fenced the land, which became the XIT Ranch—then the biggest cattle ranch in the world, sprawling over ten Texas counties. At the confluence of two of them—Dallam and Hartley—the town of Dalhart was established and with it, in 1903, its first national bank.

For years, all was well. The ranch was carved into parcels and marketed to individual farmers, who turned to the bank for the capital they needed to buy seed and implements. Soaring grain prices during World War I kept prosperity going. But times turned hard, and stayed hard through the 1920s and early '30s. Relentless heat and drought parched the plains, and winds swept away the plowed-up topsoil, ruining crops. Hucksters promising to make the rain fall preyed on the desperate populace. One farm after another was lost, threatening to take lenders down with them.

In early March 1933, to the shock and dismay of the townspeople, the First National Bank of Dalhart closed its doors—and never reopened. The bank entered the year with $348,725 in deposits—life savings, checking accounts and rainy day funds—and now it was gone. 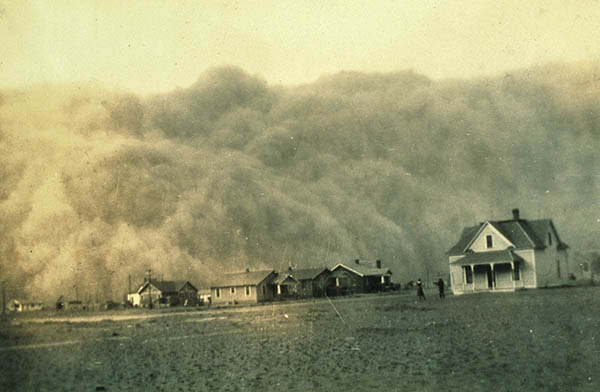 On April 18, 1935, a dust storm gathered near the town of Stratford about 25 miles northeast of Dalhart. During the Great Depression, winds swept away parched topsoil, dooming farms, businesses and the national bank in Dalhart. (National Oceanic and Atmospheric Administration: George E. Marsh Album)

A 1937 report by the Comptroller of the Currency blamed the failure on "[m]ismanagement, overextension of credit, shrinkage of deposits and general depressed conditions due to unfavorable business and crop circumstances locally." The grim report cited 7 ½ acres of farmland that—due to the six-year drought—realized only a "sum of $3.48." One hundred and sixty acres of range land, with a book value of $2,408.73, was appraised at a mere $125.

On June 20, 1934, the gloom lifted a bit. "Dalhart and this territory smiled from ear to ear this morning," a local newspaper exulted. A new national bank opened with the same address as the old—302 Denrock Avenue. The charter number was fresh, along with a subtle name change, from "First National Bank of Dalhart" to the "First National Bank in Dalhart." The "in Dalhart" bank purchased some assets of the "of Dalhart" bank—enabling long-suffering depositors to get 40 percent of their money back.

"Of Dalhart" bank: Ten-dollar note issued by the First National Bank of Dalhart in the 1920s and signed by bank president George Ely and cashier J.A. Childers. Ely was also president when the bank opened its doors in 1903, two years after the founding of the town.

From "Of" to "In": Twenty-dollar note from the new First National Bank in Dalhart after the First National Bank of Dalhart closed in the early 1930s. The note was signed by two familiar names in town—president Charles C. Woods and cashier A.H. Hesse. The men had held those respective positions at a state bank a block away at 202 Denrock Avenue. George Ely, president of the failed "of Dalhart" bank, stayed on as a director and shareholder of the new bank.

Going forward, under legislation passed by Congress in 1933, deposits up to $5,000 would be protected by federal deposit insurance. In a letter to customers of the old bank, the new bank promised "the best possible service consistent with sound banking policy."

With many familiar faces, a slightly different title, and insured deposits, the newcomer won over the town. The First National Bank in Dalhart is still in business today. Droughts occasionally strike the Texas Panhandle, but nothing like the Dust Bowl of the 1930s. The bank finances not just seed and tractor purchases but also soil-preserving investments in crop rotation and irrigation. Dalhart’s economy is still based on agrobusiness, and the First National Bank continues to play an important role in the community’s economic life.