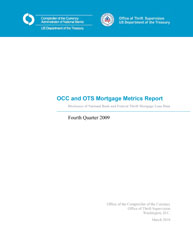 Performance on home mortgages serviced by the largest national banks and federally regulated thrifts declined for the seventh consecutive quarter in the fourth quarter of 2009, though home foreclosures slowed and new home retention actions continued strong, according to a report released today by the Office of the Comptroller of the Currency and the Office of Thrift Supervision.

The OCC and OTS Mortgage Metrics Report for the Fourth Quarter 2009 showed the overall percentage of current and performing mortgages fell to 86.4 percent at the end of 2009, driven by an increase in mortgages that were 90 or more days past due. Prime mortgages, which make up two-thirds of the mortgages in the portfolio, continued to have the greatest increases in delinquency.

Although the number of new home retention actions was more than twice the number of new modifications during the same quarter a year ago, it dropped 12.4 percent from the third quarter. Servicers reported that the fourth quarter decline followed a surge in new home retention actions in the second and third quarters of 2009 after the introduction of HAMP.

However, servicers report that they expect new foreclosure actions to increase in upcoming quarters as alternatives to prevent foreclosure are exhausted and a larger number of seriously delinquent mortgages slip into foreclosure.

The report noted that the OCC and the OTS have encouraged servicers to work with borrowers facing difficulties in making payments on any of their residential real estate loans, including second mortgages or home equity lines of credit, and to provide appropriate home retention solutions when possible. Although it is often difficult to obtain information needed to effectively restructure and modify multiple residential real estate loans to the same borrower, particularly when one of the loans is current, or the loans are held or serviced by different entities, initiatives are under way to make this information more available.

Current second liens that stand behind delinquent or modified first liens have an elevated risk of default and loss. The OCC and OTS have instructed banks and thrifts that hold such second liens, which are a minority of all second liens, to hold appropriate loan loss reserves to reflect the elevated risk.