The Negotiable CD: National Bank Innovation in the 1960s

The negotiable certificate of deposit (CD) revolutionized the world of finance. Introduced in 1961 by First National City Bank of New York (now Citibank), the flexible CD enabled large banks to quickly and efficiently raise funds for lending. They could now draw liquidity from investors as well as businesses and consumers.

Legal constraints handcuffed banks in responding to the rising interest rate environment. Anti-branching laws, for example, limited their ability to open new offices, which would have helped them attract deposits. Moreover, banks were forbidden to pay interest on both checking accounts and time deposits held for less than 30 days, and the maximum rate they could pay on time deposits was set by regulation.

In this situation, Walter Wriston, then executive vice president of National City, saw an opportunity. The bank lent $10 million to a New York broker in government securities, which agreed to accept trades in certificates of deposits. With this move, Nat City helped create a viable secondary market. A purchaser of a certificate who needed cash could now immediately sell the certificate to another investor—just as he or she would with a Treasury bill. 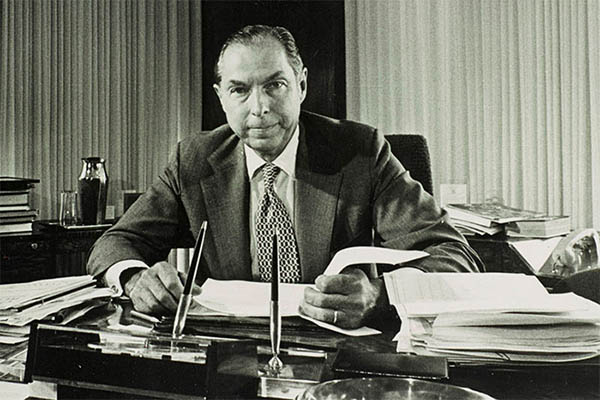 Walter Wriston began his banking career in 1946 after his discharge from the Army. He rose rapidly through the management ranks of the First National City Bank, later known as Citibank. Wriston was a key architect of the negotiable certificate of deposit, giving banks flexibility to offer market rates of interest on deposits and helping banks stabilize their funding. Wriston became president of First National in 1967 and in 1970, its chairman. (Citi Center for Culture/Heritage Collection) 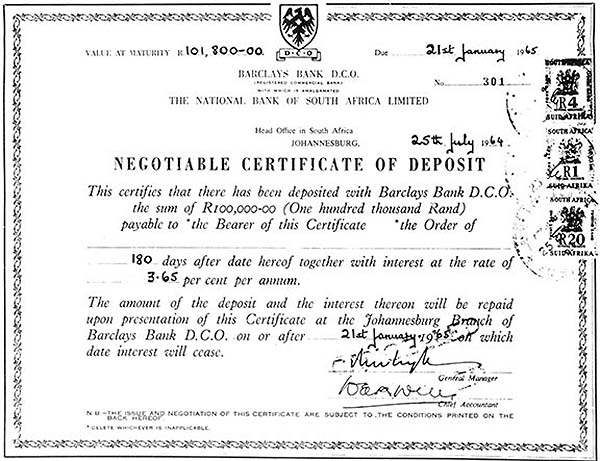 In February of 1961, First National City Bank issued the first negotiable certificate of deposit. In July of 1964, the British bank Barclays, in amalgamation with the National Bank of South Africa (above), issued a negotiable CD at 100,000 Rand (about $140,000 at the time). Two years later, the London office of First National introduced the first "Eurodollar" negotiable CD—creating a global market of about $50 billion by 1980. (A.P. Faure/South African Financial Markets Journal)

Barron's observed that "these certificates gained such widespread acceptance that their rates became the money market's most keenly watched indicator, more so even than the traditional bellwether, Treasury bill yields." Wrote a Wriston biographer, the "negotiable CD would in no small measure help fuel [the 1960s economic] expansion by pumping funds into the banking system."

Today, many of the old limits on deposits and branching faced by National City are gone. The ban against paying interest on business checking accounts was lifted by the Dodd-Frank Consumer Protection and Wall Street Reform Act of 2010. The negotiable certificate of deposit was the device that cracked open the door in 1961.