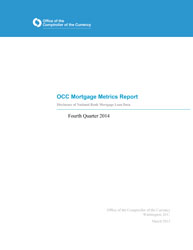 Mortgage Performance Improved During the Fourth Quarter of 2014

The performance of first-lien mortgages serviced by eight national banks improved in the fourth quarter of 2014, according to the Office of the Comptroller of the Currency's (OCC) quarterly report on mortgage performance.

The OCC Mortgage Metrics Report, Fourth Quarter 2014, showed 93.2 percent of mortgages included in the report were current and performing at the end of the quarter, compared with 93.0 percent at the end of the previous quarter and 91.8 percent a year earlier. The percentage of mortgages that were 30 to 59 days past due was 2.4 percent of the portfolio, a 9.4 percent decrease from a year earlier. Seriously delinquent mortgages—60 or more days past due or held by bankrupt borrowers whose payments are 30 days or more past due—made up 3.1 percent of the portfolio—a 12.2 percent decrease from a year earlier.

The mortgages in this portfolio comprise 45 percent of all residential mortgages outstanding in the United States—23.1 million loans totaling $3.9 trillion in principal balances. This report provides information on their performance through December 31, 2014