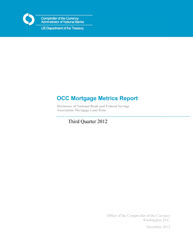 The overall quality of first-lien mortgages serviced by large national and federal savings banks improved from the same period a year ago but declined from the prior quarter, according to a report released today by the Office of the Comptroller of the Currency (OCC).

The OCC Mortgage Metrics Report for the Third Quarter of 2012 showed 88.6 percent of mortgages were current and performing at the end of the quarter, compared with 88.7 percent the prior quarter and 88.0 percent a year earlier. The percentage of mortgages 30 to 59 days past due rose 10.4 percent from the prior quarter to 3.1 percent, a 3.6 percent increase from a year ago. Seriously delinquent mortgages—60 or more days past due or held by bankrupt borrowers whose payments are 30 or more days past due—remained unchanged from the previous quarter at 4.4 percent and down 10.8 percent from a year earlier.

Servicers continued to emphasize alternatives to foreclosure during the quarter. Servicers implemented 382,899 home retention actions during the quarter, while initiating 252,604 new foreclosures. The number of home retention actions implemented by servicers decreased 8.9 percent from the prior quarter and decreased 16.6 percent from a year earlier.