Mortgage Performance Improved from a Year Ago, OCC Report Says 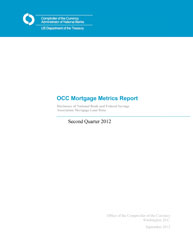 Mortgage Performance Improved from a Year Ago, OCC Report Says

The overall quality of first-lien mortgages serviced by large national and federal savings banks improved from the same period a year ago but showed seasonal decline from the prior quarter, according to a report released today by the Office of the Comptroller of the Currency (OCC).

Several factors contribute to the year-over-year improvement, including strengthening economic conditions, servicing transfers, and the ongoing effects of both home retention loan modification programs as well as home forfeiture actions.

Servicers continued to emphasize alternatives to foreclosure during the quarter. Servicers implemented 416,036 new home retention actions during the quarter, while starting 302,636 new foreclosures. The number of home retention actions implemented by servicers increased 17.9 percent from the prior quarter but decreased 8.8 percent from a year earlier.