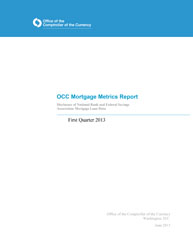 The performance of first-lien mortgages serviced by large national and federal savings banks continued to improve in the first quarter of 2013, according to a report released today by the Office of the Comptroller of the Currency (OCC).

The OCC Mortgage Metrics Report for the First Quarter of 2013 showed evidence that the strengthening economic conditions, servicing transfers, home retention efforts, and home forfeiture actions have contributed to improving the performance of home mortgages in the first quarter of 2013. The report showed 90.2 percent of mortgages were current and performing at the end of the quarter, compared with 89.4 percent the prior quarter and 88.9 percent a year earlier. Seriously delinquent mortgages—60 or more days past due or held by bankrupt borrowers whose payments are 30 days or more past due—decreased to 4.0 percent compared with 4.4 percent at the end of 2012 and 4.5 percent a year ago. The percentage of mortgages that were seriously delinquent has decreased 10.4 percent from a year earlier. The percentage of early stage delinquencies, mortgages that were 30-59 days past due, was 2.6 percent, down 9.3 percent from the previous quarter but up 3.0 percent from a year ago.

Servicers implemented 348,733 home retention actions—including modifications, trial-period plans, and shorter term payment plans—compared with 131,704 home forfeiture actions during the quarter—completed foreclosures, short sales, and deed-in-lieu-of-foreclosure actions. The number of home retention actions implemented by servicers decreased by 5.0 percent from the previous quarter and 1.2 percent from a year earlier. Nearly 94 percent of modifications in the first quarter of 2013 reduced monthly principal and interest payments; 56.4 percent of modifications reduced payments by 20 percent or more. Modifications reduced payments by $361 per month on average, while modifications made under the Home Affordable Modification Program (HAMP) reduced monthly payments by an average of $547.

The mortgages in this portfolio comprise 55 percent of all mortgages outstanding in the United States—27.9 million loans totaling $4.7 trillion in principal balances. This report provides information on their performance through March 31, 2013.