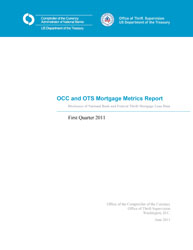 The performance of first-lien mortgages serviced by large national banks and federal thrifts improved during the first quarter of 2011, according to a report released today by federal regulators.

The quarterly report by the Office of the Comptroller of the Currency and the Office of Thrift Supervision showed that 88.6 percent of the 32.7 million loans in the portfolio were current and performing at the end of the first quarter of 2011. While delinquencies and foreclosures remained elevated from historic norms, delinquencies improved across all risk categories and for all investors. Mortgages that were 30-59 days delinquent fell to 2.6 percent of the portfolio, the lowest level in three years. Mortgages more than 60 days past due and delinquent loans to bankrupt borrowers declined for the fifth consecutive quarter to 4.8 percent of the portfolio, the lowest level since the first quarter of 2009.

The large inventory of seriously delinquent mortgages and foreclosures in process continued to work through the loss mitigation and foreclosure process. Servicers implemented 557,451 home retention actions (17.4 percent more than the previous quarter) to mitigate risk and assist homeowners struggling with mortgages. Driving that increase was a 78 percent rise in trial-period plans. Permanent modifications fell during the first quarter of 2011, reflecting the lower number of trial-period plans in the third and fourth quarters of 2010 that would be maturing during the first quarter of 2011.

Other key findings from the report included:

The report covers about 63 percent of all first-lien mortgages in the United States, worth $5.7 trillion in outstanding balances.