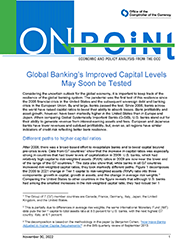 The pandemic was the first resilience test of the global banking system since the 2008 financial crisis and the subsequent sovereign and banking crisis in the European Union. By and large, banks passed the test. Since 2008, banks across the world have raised capital ratios to boost their ability to absorb losses. Bank profitability and asset growth, however, have been markedly higher in the United States than in Europe and Japan. When comparing Global Systemically Important Banks (G-SIBs), the U.S. banks stand out for their ability to generate revenue from interest earning assets and fees. Lower revenues and subdued profitability are reflected in lower market valuations for European and Japanese banks. Even so, market indicators of credit risk are similar across regions, pointing to better bank resilience across all regions.