29th Comptroller of the Currency 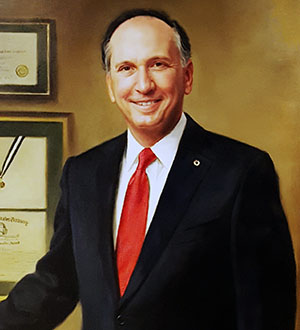 The Comptroller of the Currency is the administrator of national banks and chief officer of the Office of the Comptroller of the Currency (OCC). The OCC supervises more than 1,500 federally chartered commercial banks and about 50 federal branches and agencies of foreign banks in the United States, comprising nearly two-thirds of the assets of the commercial banking system. The Comptroller also is a director of the Federal Deposit Insurance Corporation and NeighborWorks® America.

In September 2007, Comptroller Dugan was named Chairman of the Joint Forum, which operates under the aegis of the Basel Committee on Banking Supervision, the International Organization of Securities Commissions, and the International Association of Insurance Supervisors. The Joint Forum includes senior financial sector regulators from the United States, Canada, Europe, Japan, and Australia, and deals with issues common to the banking, securities, and insurance industries, including supervision of conglomerates.

Before his appointment as Comptroller, Mr. Dugan was a partner at the law firm of Covington & Burling, where he chaired the firm's Financial Institutions Group and specialized in banking and financial institution regulation.

He served at the U.S. Department of the Treasury from 1989 to 1993 and was appointed Assistant Secretary for Domestic Finance in 1992. While at Treasury, Mr. Dugan had extensive responsibility for policy initiatives involving banks and financial institutions, including the savings and loan cleanup, Glass-Steagall and banking reform, and regulation of government-sponsored enterprises. In 1991, he oversaw a comprehensive study of the banking industry that formed the basis for the financial modernization legislation proposed by the administration of the first President Bush.

From 1985 to 1989, Mr. Dugan was Counsel and Minority General Counsel for the U.S. Senate Committee on Banking, Housing, and Urban Affairs. There he advised the committee as it considered the Competitive Equality Banking Act of 1987, the Proxmire Financial Modernization Act of 1988; and the Financial Institutions Reform, Recovery, and Enforcement Act of 1989.

A 1977 University of Michigan graduate with an A.B. in English literature, Mr. Dugan earned his J.D. from Harvard Law School in 1981. Born in Washington, D.C., in 1955, Mr. Dugan lives in Chevy Chase, Maryland, with his wife, Beth, and his two children, Claire and Jack.